Birding Guide to West Virginia  (Sorry Sold Out!) we will post if they become available again 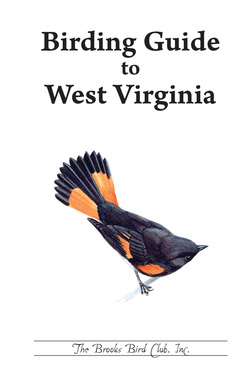 Birding Guide to West Virginia, by the members of The Brooks Bird Club, Inc., is the first guide to finding birds exclusively in the Mountain State. The Brooks Bird Club has been doing biological studies in West Virginia for more than 70 years. This guide highlights the most productive and reliable spots to find many of the over 300 bird species that have been recorded for West Virginia.
Geographically, West Virginia is a “transition state,” extending north in latitude almost equal to that of New York City, and farther south than that of Richmond, Virginia. The state’s elevation extends from 248 feet to nearly 5,000 feet above sea level, with an average elevation of 1,500 feet. With its large tracts of mature forests and sparse human population, West Virginia provides ideal nesting habitat for many forest birds. In summer, it is home for many Neotropical migrants. The Mountain State is viewed as an oasis for species such as the Cerulean Warbler and the Scarlet Tanager that require large tracts of mature forest (more than 500 acres), and are increasingly scarce throughout their range. West Virginia also provides habitat for birds using grasslands, wetlands, and early successional areas. The state is a major flyway in spring and fall, and many northern species are found in the state during the winter.
West Virginia has a wonderful state park system and offers easy access to many national and state forests. Although you can pursue birds with success on any of the state’s country roads, this book will guide you toward the prime spots and help ensure a fine bird-watching experience in wild, wonderful West Virginia